I wanted to get away from normal life for a few days and had chosen Goa as my hideout after having read various traveller accounts on the serene Goan countryside. Two of my friends had decided to join in as well. One has a home in Vasco that was lying vacant, which he graciously let us use for a few days (yeah, I do have some useful friends. Let’s call this friend ‘House Owner Friend’ or ‘HOF’ for short). The other – let’s call him ‘Beardy’ since he has a beard for a face – was gracious enough to take time out from his busy schedule to join in.

Since we’d also decided that this would be a ‘Goa on a shoestring budget’ trip, Beardy had chosen The Indian Railways for his travel; and to keep his costs low, had gone in for General or Second Class tickets. He had planned to visit his hometown as well, and hence his itinerary looked as follows: Bangalore > Goa > Kerala > Bangalore. For having booked such a long trip for under Rs 1000, he was feeling pretty good about himself, and also got me feeling a tad guilty for choosing to fly in to Goa (My justification: I was coming in from Mumbai, and had got a cheap flight using the combination of a MakeMyTrip deal and my Payback points).

Beardy had reached Goa earlier that morning, and had come to the airport to pick me up. The 15 hour second class rail journey that he’d undertaken in the Indian heat should’ve made him 2 shades darker, and caked his face with dust and dirt. But there he was, bright and shiny. All thanks to his beard, I supposed, inside which he must’ve cocooned himself all through the journey.

Since I was here in search of peace and tranquility, I wanted this to be a quiet, offbeat kind of trip (Plus, I’d already done the usual Baga-Calangute-Casinos tourist circuit a few times already). HOF proved to be even more resourceful when he jugaad-fied a car from one of his friends that we could use while we were there. Thus began our 3 day ‘offbeat Goa’ sojourn.

Vasco (short for Vasco da Gama; named after the famous Portuguese explorer) – a port city and Naval base, is heavily reliant on the port for most of its economic activity. As a tourist, Vasco is probably the last place in Goa you would want to end up in, especially when Tripadvisor lists ‘Vasco’s Municipal Market’ as one of the top 5 places to see here. But Vasco is indeed a beautiful little city. Vasco also threw up a few hidden gems. 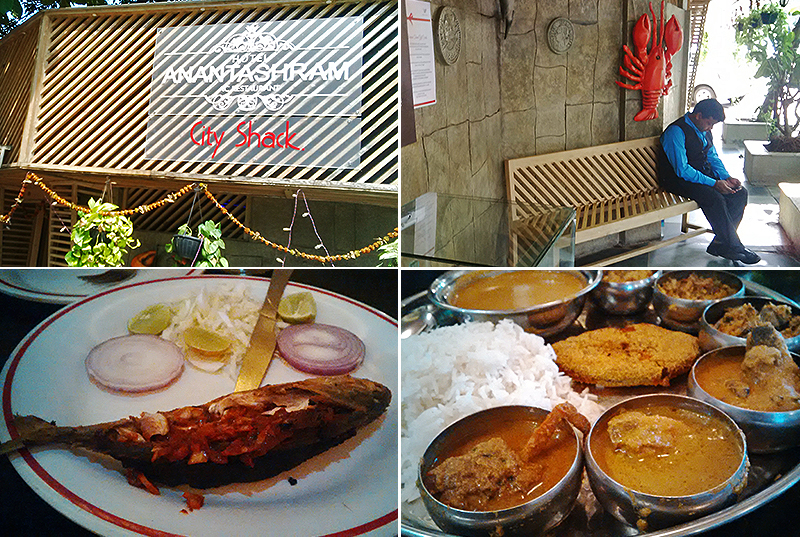 First, a restaurant named ‘Ananthashram’ (unlikely name for a Goan non vegetarian restaurant!). The special non-veg thali (rice plate with different kinds of sea food sides) I had there was just out of the world – so fresh, delicious and in line with our shoestringy budget. The normal non-veg thali (with a few sides, one fish curry and one fish fry) is just Rs 80, and the special thali is Rs 300. We kept going back there for more every night.

I have always been a fan of Goan Fish curry (Mamma’s kitchen in Panaji is where I had it first), and Ananthashram’s version is by far the best I’ve had. We also tried the Mackeral Reshad (Reacheado), Red Snapper (Chonak) Reshad and Goa’s famous Chicken Vindaloo during our subsequent visits. While the Reshards were terrific (slightly sweetish), I didn’t dig the vindaloo.

So if you ever stray in to Vasco, hunt down this place and have fish from there. If you don’t like it, your next meal’s on me.

Aside: Later, when I was back in Mangalore, I got this deep craving to eat some Mackeral Reshad again. So I got hold of a recipe (here’s the one: http://www.food.com/recipe/fish-reshad-stuffed-fish-goan-style-102408), and cooked myself. It turned out OK, but not as good as the one I had back in Vasco. 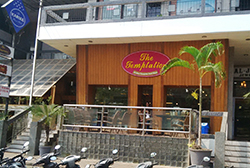 The other gem you should definitely visit is a bakery named Temptation. The chocolate-vanilla rolls and bebinca (a Goan sweet), which I picked up based on HOF’s recommendation, were lovely.

Then there’s the Bogmalo beach which we visited towards late evening. We had our dinner from Joet’s on the beach. The fish fingers, made from sardines (who makes fish fingers using sardines?!) destroyed the evening for us, but then some of the other dishes we had salvaged it to some extent.

The days I spent in Vasco also led me to believe that Goan women are more hardworking than men. Now, I may be wrong here, but I say this because I saw more working women than men in Vasco – selling stuff in markets, transporting heavy loads by balancing sacks and buckets on their heads, running eateries, baking cakes and bebinca, or just plain bossing their husbands. 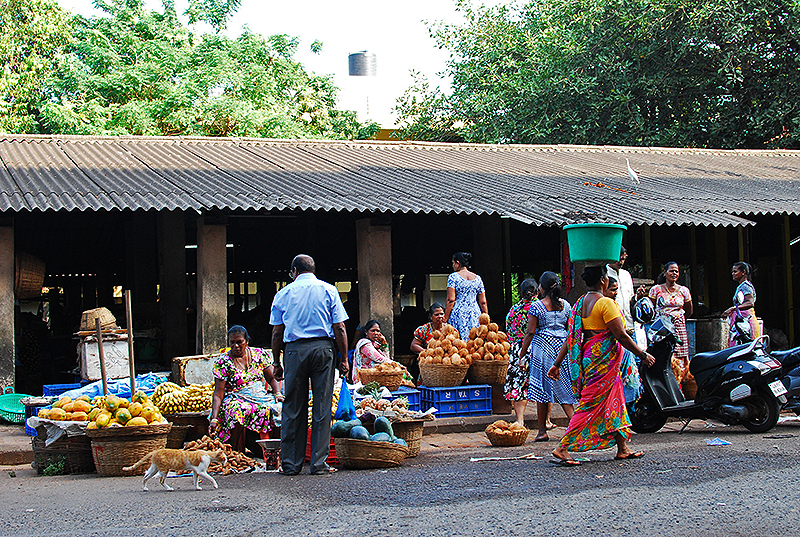 Beardy had to rush home!

Late that night, we were awakened by a phone call that Beardy received. It was his tenant calling from back home, saying that the house was flooded due to incessant rains in Bangalore.

Apparently Beardy had faced this situation once earlier, when shit had hit the fan (no, seriously. Dirt from the clogged gutters and tanks had floated in, and he was awakened in the middle of the night, floating alongside aforementioned dirt, much closer to the fan than he had set himself to rest the previous night. It had taken him two days of back-breaking work to get his house back in order that time).

After instructing his tenant to remain vertical and keep everything important 2 feet above ground level, he started checking for flights to head back to Bangalore. He booked an early morning flight which cost him four and a half thousand rupees. There went all the shoestring budget planning, down the drain – what a waste! In parting, like a true optimist, he remarked thus: “On a brighter note, it’s not every day that I get to do a 15 hour train journey for dinner”. 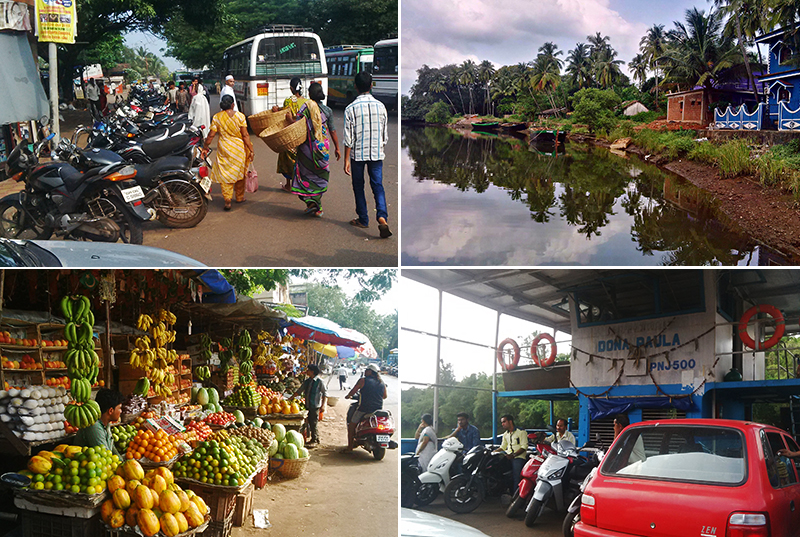 Driving is what relaxes me the most. I sometimes wonder whether I should have pursued my childhood dream of becoming a bus driver. We were driving up north, with a rough intention of seeing some of the beautiful beaches of North Goa.

Driving through the hinterlands of Goa was a fresh and beautiful experience for me. The roads in Goa, unlike those in many other parts of India, are very well maintained. Many new bridges that have come up in the past few years have connected the interiors and islands better by road. 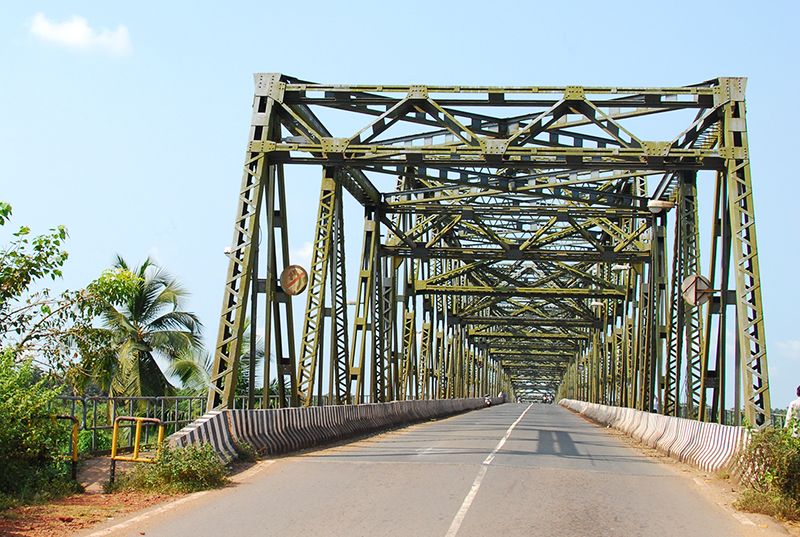 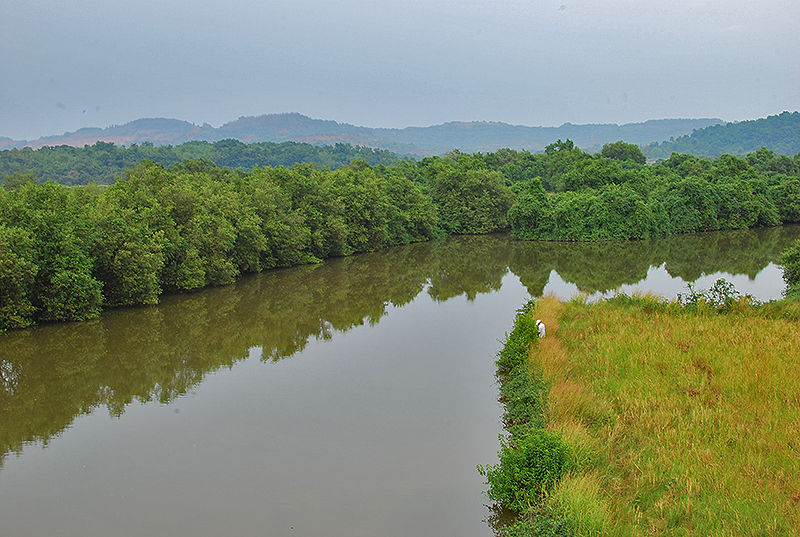 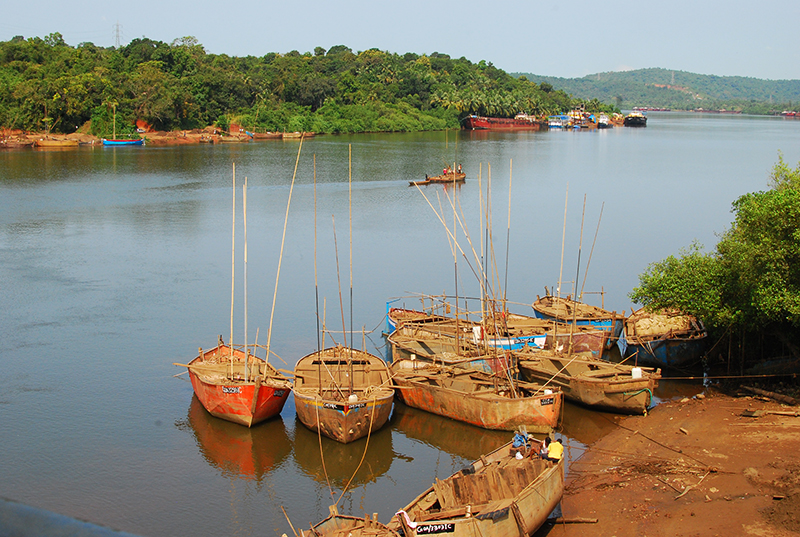 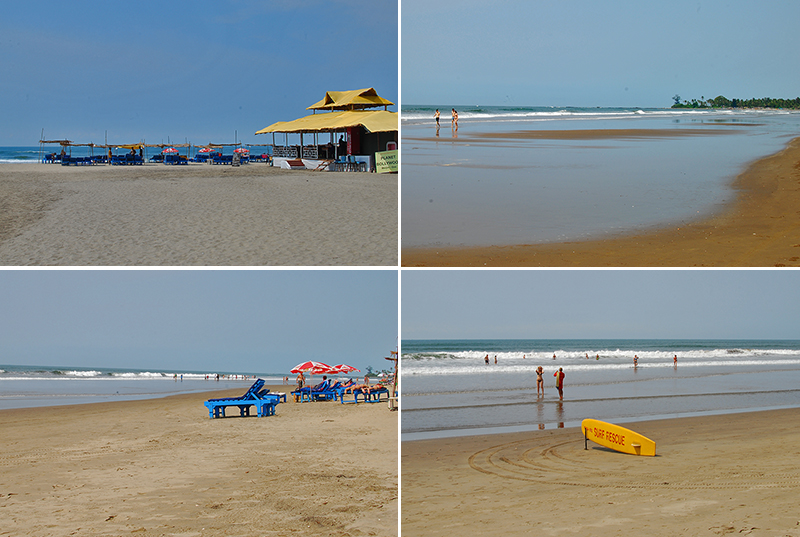 We soon came upon Morjim beach. Sun was beating down hard, and the beautiful, white-sandy beach glistened in sunlight. There were only a few people around, mostly foreigners, either resting on those wooden beach chairs or inside water. Morjim beach is also a nestling and hatching habitat of the Olive ridley sea turtle, an endangered species. You can see the Goa forest department’s Turtle conservation center at the entrance of the beach.

Further north is the Mandrem beach, which we skipped and continued our journey to Arambol beach – considered one of the most beautiful beaches in Goa. Arambol, like Morjem, was not very crowded, but had more shacks/eateries lining the beach. We had lunch at a nearby joint, at the entrance of the beach (just outside the car park). The food (again, centering on fish), though a bit oily, was fresh and good. The joint had posters of art and yoga pasted all around. These beaches up north, as I could see, were more about relaxation, peace and tranquility. We wanted to drive to Querim (Keri) beach, the northernmost beach of Goa, but the heavy lunch made us lethargic, and we decided to lazily drive to Chorao island. 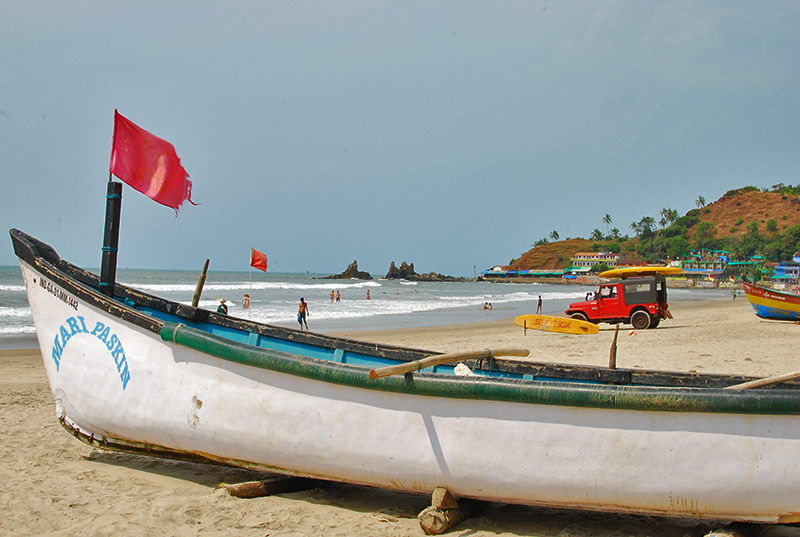 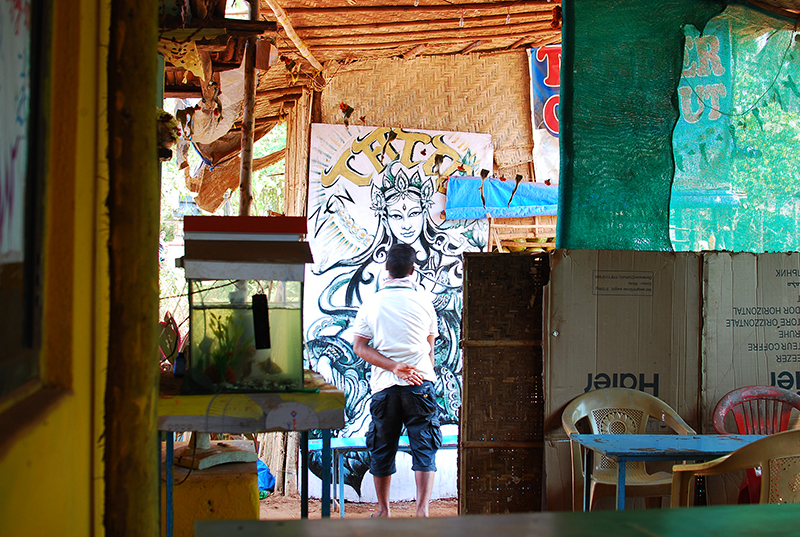 Chorao and Divar islands should be on your itinerary if you want to get a taste of the picturesque settings of rural Goa. Our drive through Chorao village gave us beautiful views of green and yellow paddies, small white chapels, brightly colured Portuguese villas and some thatched houses. We also intercepted one of the famous Goan bread seller cyclists, and sampled some Pois. Chorao island is also home to Dr Salim Ali Bird Sanctuary – Goa’s only bird sanctuary. We took the ferry to Ribander before driving back to Vasco that night. 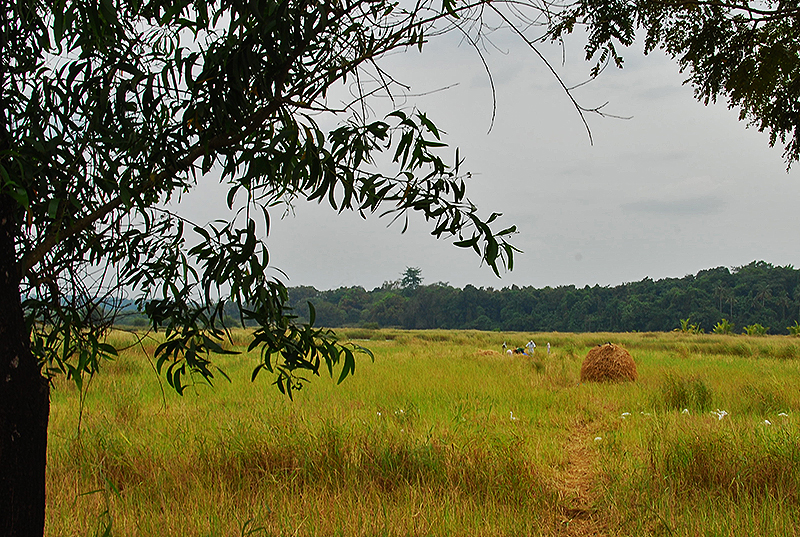 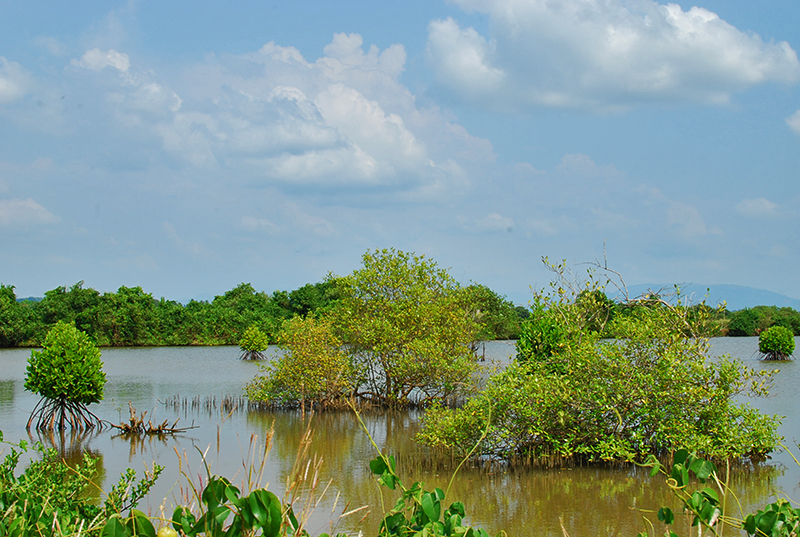 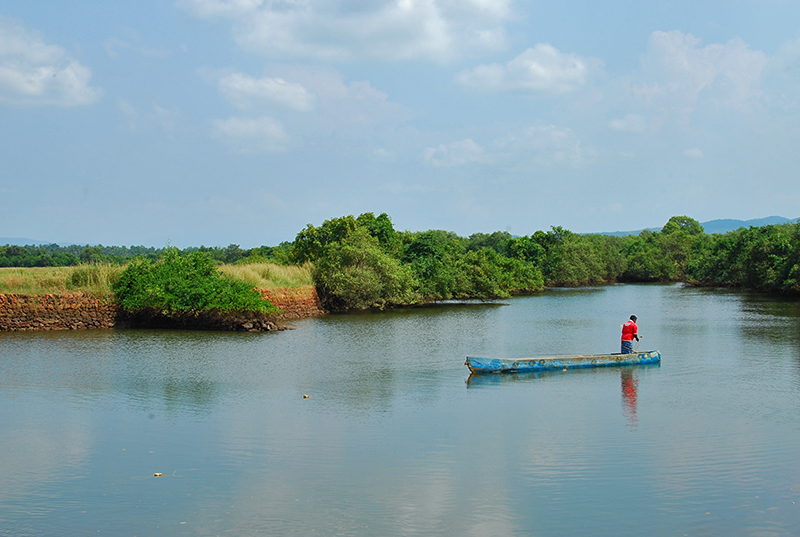 The next day, we drove through Amona, Sanquelim, Bicholim and Maem before taking a ferry across to Divar island. My inexperience with a ferry came to fore when, instead of backing my car out from the ferry on to land, I did an eight point turn to get out front first. Had I done this in any other part of India, I would’ve been shouted and sworn off the ferry, but here in Goa, I just got patient, helpless smiles and a bit of help in my endeavor. Good Goans. The ferry ride also offered us terrific views of Old Goa. Like the island of Chorao, Divar also offers views of elegant, well maintained Portuguese villas. After my visit to Divar, I got to hear from a friend of mine that some of the Portuguese villas are available for rent for visitors. Maybe next time. 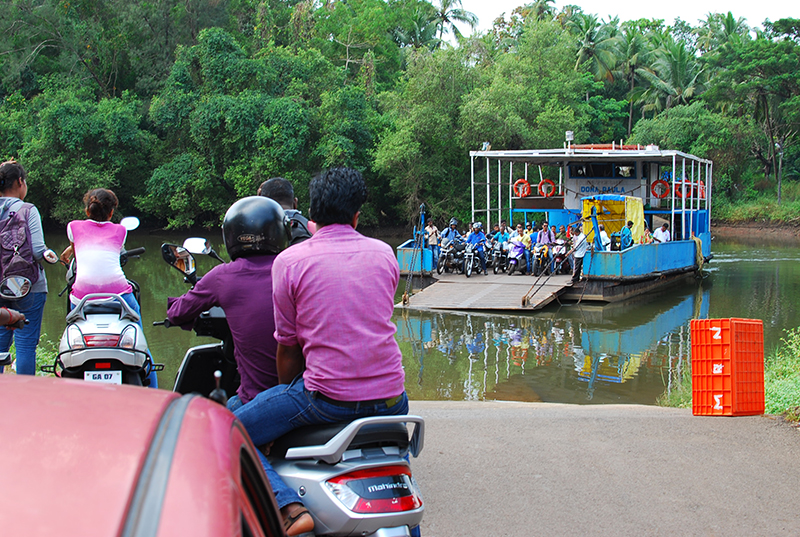 Harvalem caves, also known as “Pandava Caves” is a site protected by the Archeological Society of India. Believed to have given shelter to the Pandavas, this cave has many chambers carved into a laterite hill. Further down the cave is the Arvalem waterfall, which to me, made the trip to this place worth it. 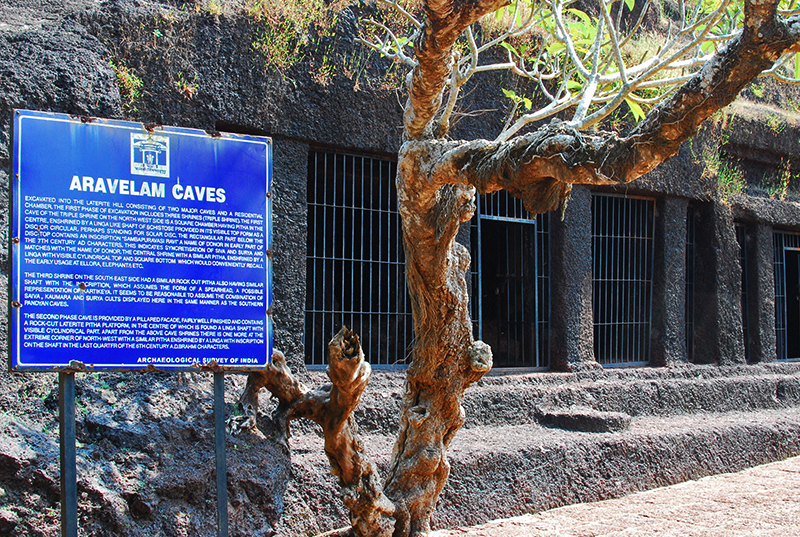 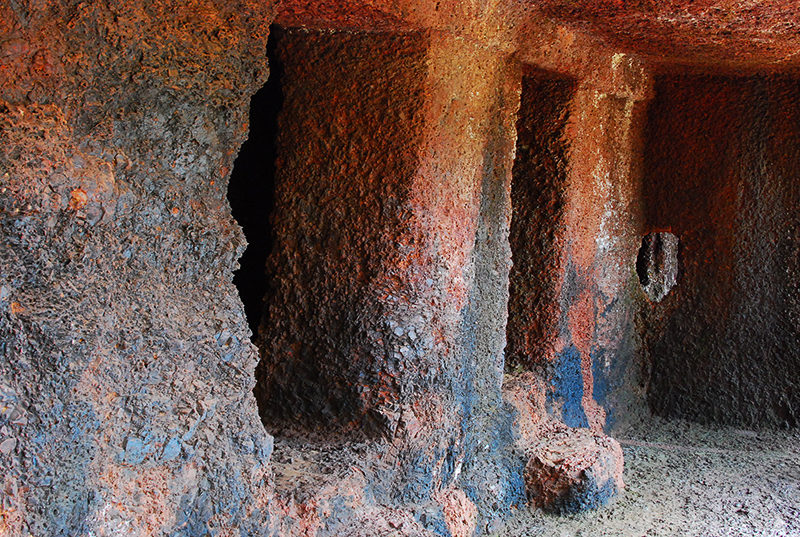 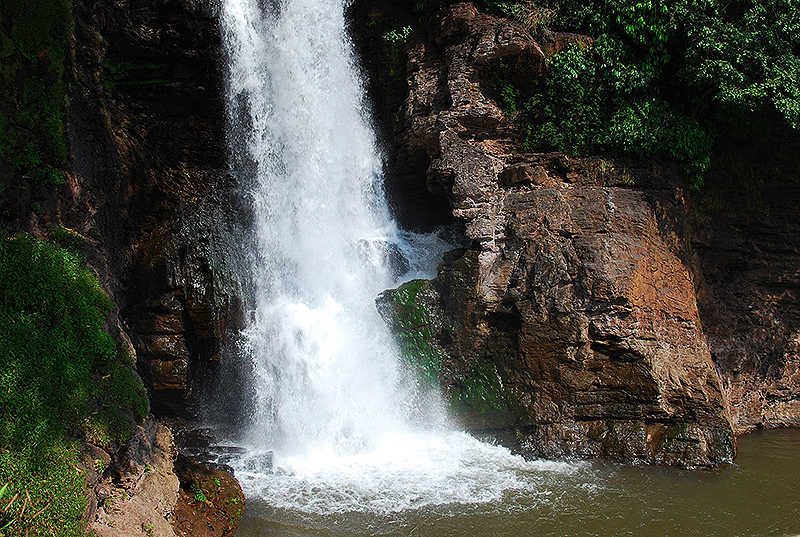 Cumbarjua canal is the only place in Goa where crocodiles can actually be seen in the wild. We did drive to the small village of Cumbarjua, but failed to find someone who could take us into the canal. Asking around with the locals didn’t help either, and so we had to abort this mission. I have to go back to for this some time. I will most probably go with these people: http://www.southernbirdwing.com/goa_wildlife/croc_cruises.htm. Or, I could just visit Baga to see some crocs (based on this article. http://timesofindia.indiatimes.com/city/goa/After-Morjim-now-crocodile-shows-up-on-Baga-beach/articleshow/49559523.cms). 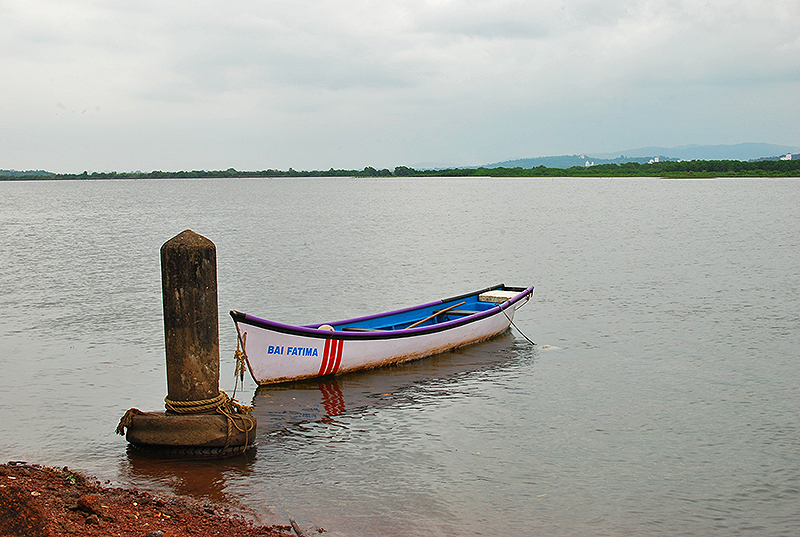 I had seen what looked like a run down church while on the ferry to Divar, and as soon as I landed in Old Goa, decided to see this place. The structure that I’d seen was the ruins of St Augustine, which is located very close to Bom Jesus Basilica. The church, now in complete ruins, gave me the creeps especially since there weren’t anyone around. 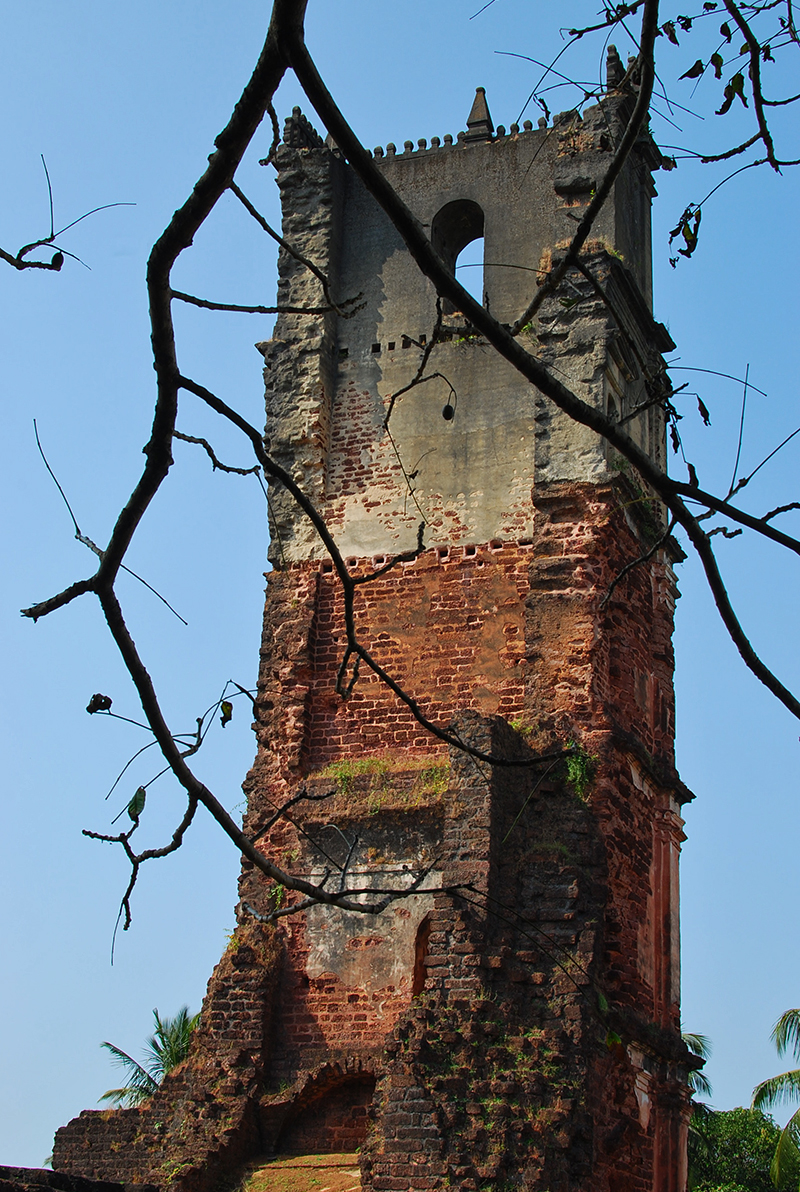 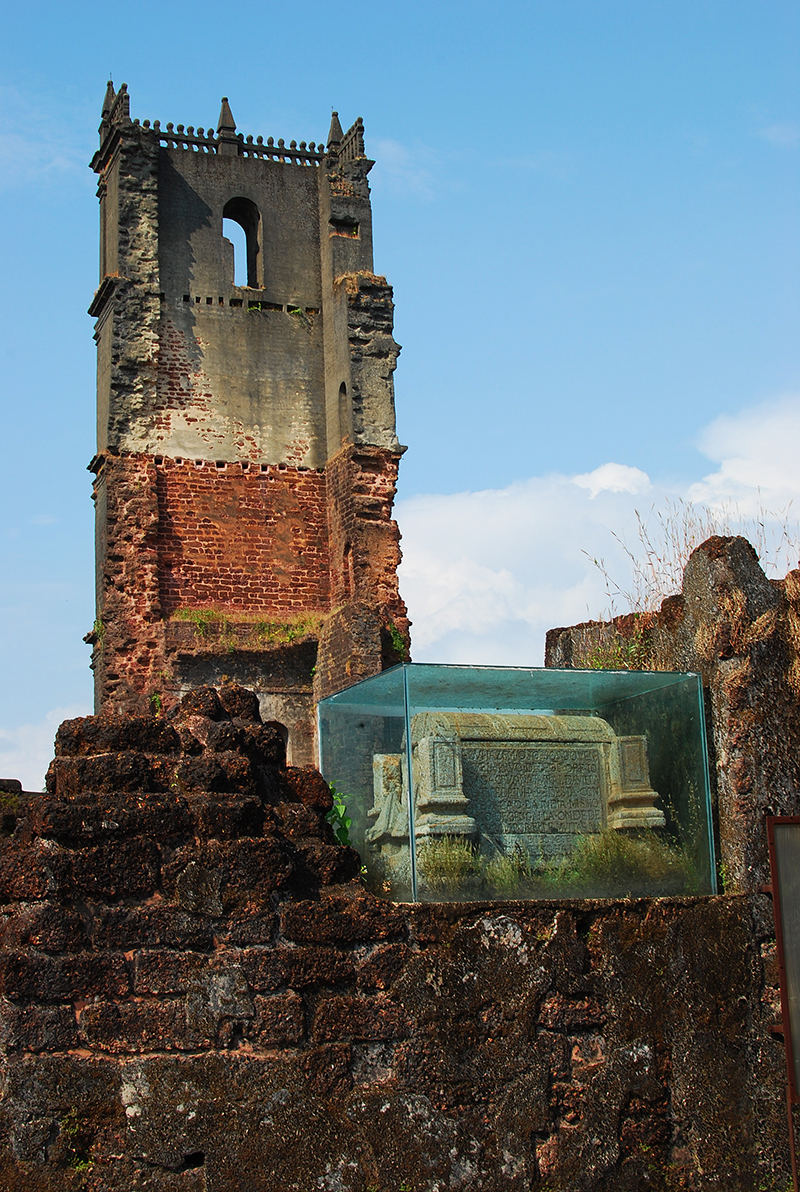 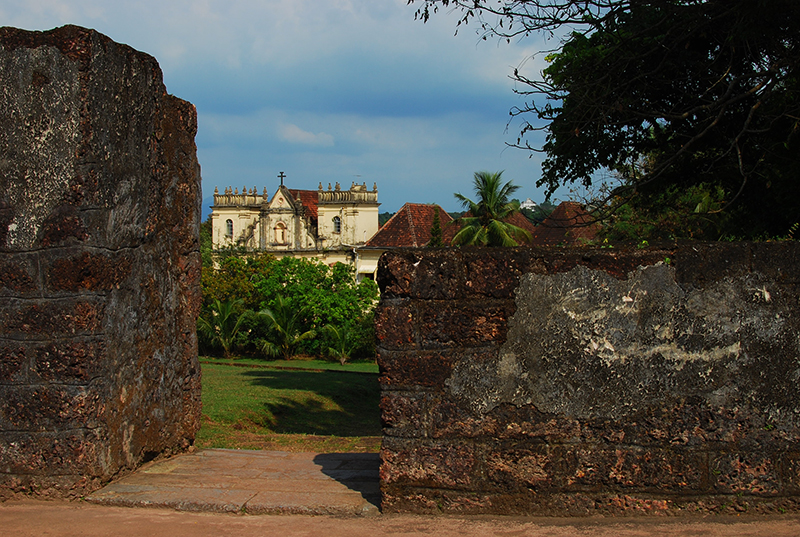 Three days driving through the hinterlands, experiencing Goa’s sunny susegad did provide me what I came looking for: a bit of peace and calm. This is the side of Goa I want to return to someday, maybe on my bike.

P.S: Beardy got his house back in order, and is planning to visit Goa again during sunnier times (in Bangalore, that is).

First published in 2008, ‘Sampath Menon Writes’ is a blog and journal maintained by Sampath. The site deals with articles around photography, lifestyle, travel, inspiration and seeks to capture the goodness around us.